The Nauheimer family has been active in boating and shipping since 1880 on the Main River. It was Peter Nauheimer who in 1880 bought the steamboat "Germania", refurbished it and launched it as his first boat under the name of "Frankfurt". The offer of transportation across the Main waterway was an immediate success. In fact, Captain Peter Nauheimer was warned by officials not to exceed the authorised number of 200 passengers onboard the "Germania". In 1888, the first landing stage outside Frankurt, in the bordering village of Schwanheim, was built. Documents dating back to 1887 show the impressive frequency with which the steamboat travelled between Frankfurt and Schwanheim. It also laid down the long-standing family boating tradition.

In contrast to 1880 today's boats serve the leisure activities of the company's guests, rather than acting solely as a means of transportation for workers everyday.

A short history of passenger shipping in Frankfurt

A short history of passenger shipping in Frankfurt

Peter Nauheimer (4th from the right) with his family in 1890

"We serve customers on Main, Rhine and Neckar"; now in the 4th generation as a family owned business. Peter Nauheimer built his first paddle steamer in 1880 and named it after his city: Frankfurt. Rustic wooden benches served workers and market-women to rest on the boat after a hard day's work.

Industrialisation brought about modern railways, which commuters used to get to and from work. A new business idea for the boat business was born: leisure excursions. This turned out to be another hit with the locals of Frankfurt and Schwanheim: for 55 cents they could take a trip to the area's favourite destinations. Soon the Nauheimer family welcomed their guests onboard the "HANSA", "HOFFNUNG", "MARGARETE", "FRIEDEN" and "SIEGFRIED". 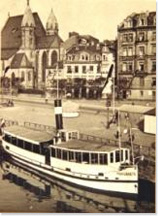 The World War I severely hit business activities in Frankfurt, but Peter Nauheimer was not to be deterred. As a quick-witted business man he – together with his sons - started to offer towing services on the Main towards Aschaffenburg.

Other obstacles such as the forced conversion of the „Vaterland“ into a fire boat or the destruction of the “Siegfried” by bombes could not defeat the courage and strength of the Nauheimer family. One of Peter's sons, Hans Nauheimer had to employ drastic measures to save the “Vaterland” towards the end of the war: he towed the boat to the shores and opened its drain holes so as to lower the boat to the ground and hide it.

Apart from towing services, Nauheimer offered a ferry service from one shore of the Main in Frankfurt to the other, as Frankfurt's bridges were all destroyed during the war. 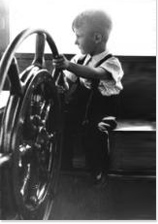 The economic miracle after WWII allowed the Nauheimer family to build a modern and fast passenger boat called the "Frankfurt". The fleet also comprised of other boats such as the "LOHENGRIN", "GOETHE", "ÄNNE NAUHEIMER" and "VATERLAND"; and for some time the "RHEINGOLD", which was the fleet's only propeller steamer until it was destroyed by a fire in the 1950s.

1974: Welcome on board PRIMUS LINIE

1974: Welcome on board PRIMUS LINIE

The 4th generation of Nauheimer boating started with Anton Nauheimer's modern boat: Primus. A new era was about to begin: spacious dining, focus on customer service and new tours characterised the new times.

1991 saw the launch of the Nautilus – the fleet's new cruiser.

1998: Into the future with combined business forces

1998: Into the future with combined business forces

2012: A new addition to the fleet as well as to the management of the company

2012: A new addition to the fleet as well as to the management of the company 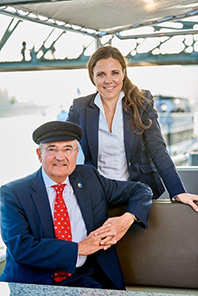 As of April 2012 there will be two introductions to the company. First of all, Marie Nauheimer is the second managing director supporting her father in the management of the company. Secondly, the Primus-Linie welcomes a new addition to its fleet: the Maria Sibylla Merian. The official ceremony took place on April 20th. “Godmother” of the new ship is Birgit Prinz, the former captain of Germany’s female national football team.